“Aadhaar Essentials Download your Aadhaar only from official UIDAI portal: eaadhaar.uidai.gov.in. If you used a public computer to download, don’t forget to delete the downloaded file after you have taken a print out,” UIDAI tweeted.

The UIDAI had also tweeted about how it discourages Plastic or PVC Aadhaar copies. It said, “Your Aadhaar letter or Aadhaar downloaded from uidai.gov.in  or mAadhaar profile is enough for any Aadhaar related service.” 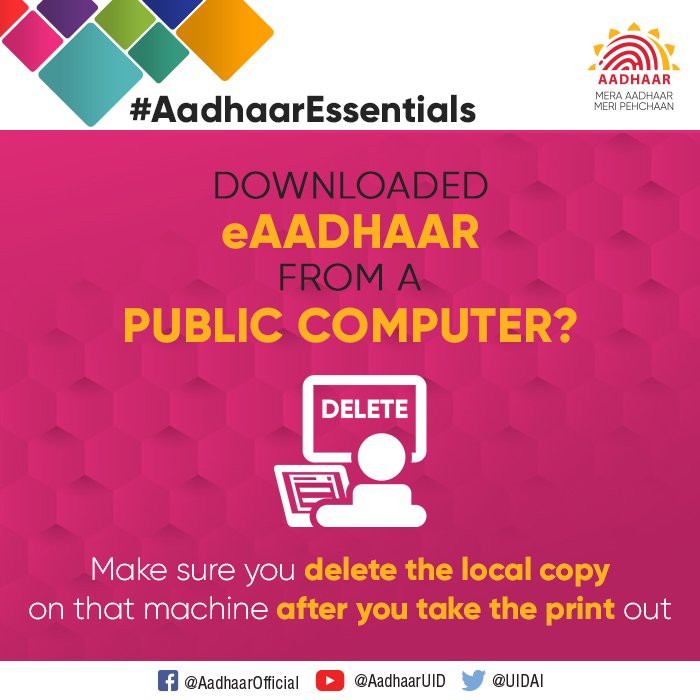 The UIDAI in its press release stated: UIDAI has asked people to keep away from such elements/shops/vendors. Dr Ajay Bhushan Pandey, CEO, UIDAI said, “So-called Aadhaar Smart card is totally unnecessary and a waste as during such printing its QR code often becomes dysfunctional. The Aadhaar card or the downloaded Aadhaar card printed on ordinary paper or mAadhaar is perfectly valid for all kind of uses.”

Apart from letting people know about how to download the Aadhaar card, it also talked about how one can apply for updating address online through UIDAI portal.

One of these facilities enables the user to apply for a change in the address fed into the Aadhaar database. The user can update the address online by submitting valid documents or an address validation letter (for those without documents), according to the UIDAI’s website – uidai.gov.in