SpiceJet’s latest flight ticket offer can’t be combined with any other offer and not applicable on group bookings and the discount will be applicable on one-way fares only, the carrier mentioned on its website.

The offer is applicable on bookings made across all channels. Without revealing the number of seats available under this offer, SpiceJet said ‘there is limited inventory available on a first-come, first-served basis.’

SpiceJet is rapidly expanding its network with the addition of new aircraft. Between April and June 2019, SpiceJet added 32 aircraft – 27 Boeing 737 NG aircraft, four Bombardier Q400s and one B737 freighter. At the end of the June quarter, SpiceJet’s fleet size stood at 107 which included 73 Boeing 737 NG aircraft, 31 Q400s, and three B737 freighters. 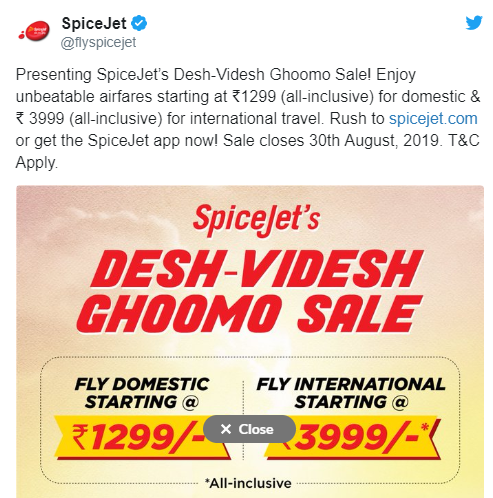 Starting 1 April, SpiceJet has announced close to 130 new flights which include 78 connecting Mumbai, 22 connecting Delhi and 10 flights between Mumbai and Delhi among others.

With the tourist season coming to an end, the domestic air passenger traffic in July increased just 3% as compared to July last year, according to the data released by aviation regulator DGCA on Thursday.

Data showed SpiceJet at number two spot in terms of domestic passenger share at 15.5% in July. Starting 5th September 2019, departure and arrival operations of all SpiceJet Flights will shift to Terminal 3from Terminal 2 of the IGI Airport, New Delhi.