RERA ACT 2019: History, Benefits, How To File Complaint Under RERA

In this article you will get to know about what is RERA Act, history of RERA, objectives of RERA, benefits of RERA, How to file a complaint under RERA and much more about this topic.

What Is RERA Act?

The Real Estate (Regulation and Development) Act, 2016 is an Act of the Parliament of India which is responsible to protect home-buyers as well as help boost investments in the real estate industry. This Act establishes the Real Estate Regulatory Authority (RERA) in each state for regulation of the real estate sector and also acts as a regulatory for speedy dispute redressal.

RERA Act is to establish the Real Estate Regulatory Authority for regulation and promotion of the real estate sector and to ensure sale of plot, apartment of building, as the case may be, or sale of real estate project, in an efficient and transparent manner and to protect the interest of consumers in the real estate sector and to establish a monitory mechanism for speedy dispute redressal and also to establish the Appellate Tribunal to hear appeals from the decisions, directions or orders of the Real Estate Regulatory Authority and the adjudicating officer and for matters connected therewith or incidental thereto.

Real Estate Regulatory Authority (RERA) Bill was introduced by Dr Girija Vyas, Minister of Housing and Urban Poverty Alleviation in 2013 by UPA 2 government. In December 2015, the Union Cabinet of India had approved 20 major amendments to the bill based on the recommendations of a Rajya Sabha committee that examined the bill. The Bill had been referred to a selection committee, which had given its report on July 2015. The bill got the approval of the Rajya Sabha on 10 March 2016 and by the Lok Sabha on 15 March 2016.

The Primary objective of RERA is to bring transparency and generate faith & confidence of real estate buyers.

Some of the objectives of RERA are – 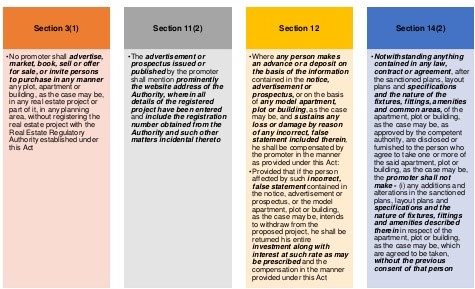 RERA applies to all Builders and Developers except the following:- 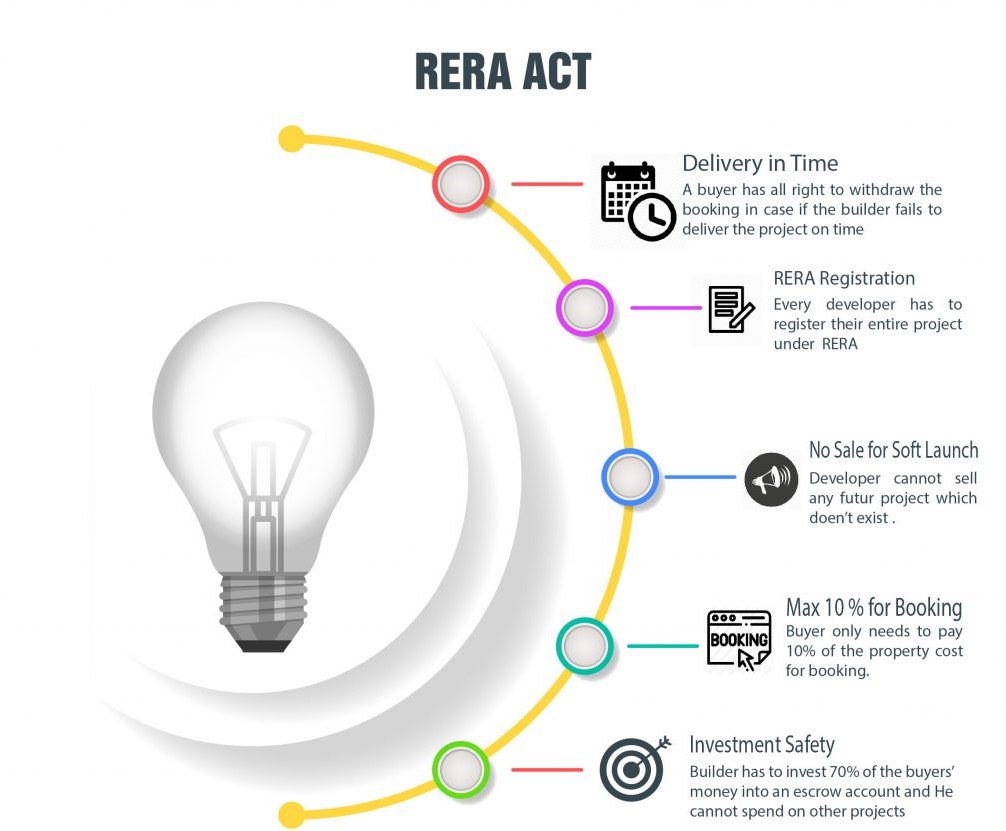 Earlier the carpet area on which the builder calculates the price of the property was not defined. Every builder/developer had his method of calculation of the Carpet Area.

This used to happen as there was no standard formula for the computation of the Carpet Area. However, this has now been clearly defined by the RERA Act and the same formula would be applied by all builders/developers for calculation of the carpet area

In case of default in payment by the buyer or default in completion of the project by the builder, the rate of interest to be paid shall be the same for both parties.

A developer usually has several projects which are being constructed simultaneously. Earlier Builders were free to divert the funds raised from Project A to fund the construction of Project B.

However, this would now not be possible as, after the introduction of RERA, the builder is liable to deposit 70% of the amount realized in for the project in a separate bank account. He can withdraw from such account only based on completion of the project, which shall be certified by a civil engineer, architect and a chartered accountant in practice.

In case there is a mismatch in the commitments made by the builder and the actual project, the buyer has the option to withdraw from the project, wherein he is entitled to a full refund of the amount paid as advance or otherwise along with interest and claim compensation.

The builder can take not more than 10% of the cost of the apartment, villa etc. as advance or application fees as the case may be, before entering into an agreement of sale.

1- Over 20,000 complaints of homebuyers have been resolved under the new central real estate law, the government said on Thursday.

In a written reply to a question in the Lok Sabha, Union minister Hardeep Singh Puri said that in Uttar Pradesh and Maharashtra, 5,989 and 5,028 complaints of home-buyers were disposed of respectively under the Real Estate (Regulation and Development) Act, 2016.

2- Sixteen cases of conflict between builders and buyers, over flat possession, were taken up for hearing during a conciliation meeting of the Uttar Pradesh RERA on August 28, 2019, and amicable solutions were reached in 11 of them, officials said.

In total, seven cases of Supertech, one each from APV Realty, Gaursons Promoters, Strategic Developers and Mahagun were amicably resolved, RERA said in a statement. “For three cases of Supertech and one case of Jaiprakash Associates, various options were suggested by the conciliator to consider and find a viable solution to resolve the matter,” RERA said. In one of the cases involving a complaint against Ajnara builders, the matter was referred back to the RERA court, according to the statement. The forum has so far received over 600 conciliation requests, RERA said.

3- 30% of RERA complaints in Karnataka resolved. A total of 3,958 complaints have been registered with the Real Estate Regulatory Authority – Karnataka (RERA-K) against builders on various grounds. Of these, 1,174 (30%) have been resolved and, in about 150 cases, buyers have withdrawn complaints after working out a compromise with the builders.
According to data sourced from RERA-K, around 2,700 complaints are being heard currently and will be resolved at the earliest. RERA-K chairman MR Kamble said: “RERA-K acts on complaints filed by homebuyers. They need to upload them on the RERA website and the authority would hear the case after receiving complaints online.”

HOW TO FILE A COMPLAINT UNDER RERA ACT:

After the implementation of the Real Estate (Regulation and Development) Act (RERA), home buyers are optimistic that the new law will protect their interests. However, the moot question is, whether people know how to file a complaint or a case, under the new RERA rules.

According to the Act, complaints can be filed against developers, builders and real estate agents registered under RERA. There are a specific set of forms to be filled and documents to be submitted for accepting your complaint.

Usually, homebuyers can lodge his or her complaint online, but some states like Tamil Nadu allow offline submission as well.

Every state’s RERA official website will have its complaint section and the buyer has to fill in the requisite details in the form prescribed. This complaint can be filed with the Real Estate Regulatory Authority, conciliating forum or the adjudicating officer.

The complaint must provide details such as:

To initiate the case under RERA, you need to file an application with all these details but it may vary from state to state.

When To File A Complaint?

One has to be prompt to decide to file a case. Any unjustified delay may weaken your case and you may not be able to seek the relief you want. Under RERA, there is no specific time frame provided for filing a complaint but it should be filed well on time.

“All complaints under RERA will have to comply with the periods as per the Limitation Act. “The time periods under this Act vary, based on the specific claims. It is advisable to approach the RERA authority whenever a violation has happened,” says Philip.

Filing a complaint under RERA is not a difficult task. You need to keep your documents ready and lodge a complaint online or offline only as per the facts of the case. If your claim is justified, RERA will not disappoint you. 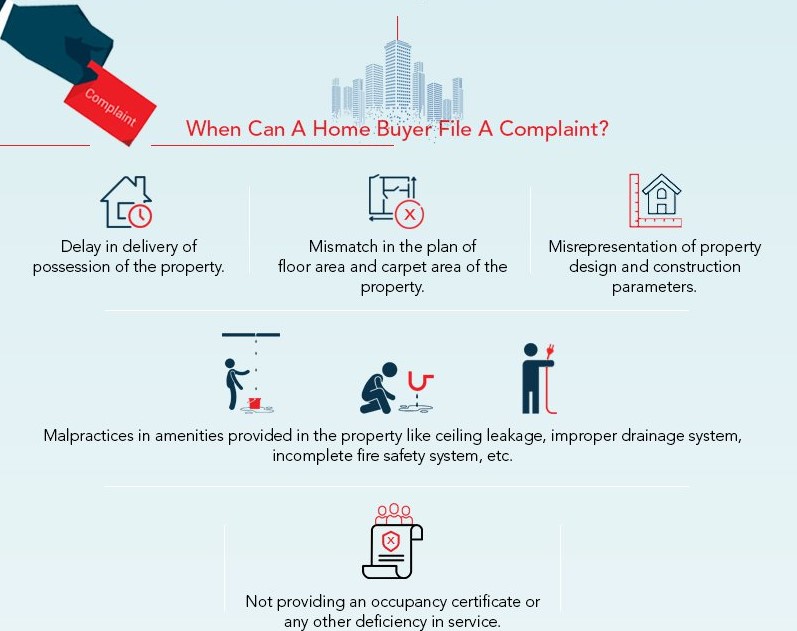 1- Since when is RERA applicable?

Though the Act itself was passed and notified in Gazette on March 2016, the implementation will be done in a phased manner. Each state has to further adopt the Act and form the RERA for implementation. States can also notify any existing agency as the regulatory authority. Specific provisions may take a little longer to implement but certain compliances on the part of Builders / Developers may become mandatory almost immediately.

2- Does it cover the purchase and rental both?

RERA does not cover rental arrangements or agreements in any form.

3- Does it cover Commercial projects too?

RERA covers all residential and commercial projects, including shops, offices and buildings.

4- Will RERA be applicable to existing projects also or only to the future ones?

As per section 3(1) of the Act, ongoing/existing projects, which have not received occupation or completion certificate, shall be covered under the Act. Builders / Developers must register such projects under RERA, within three months of implementation of the Act. Essentially almost all large projects which have not obtained completion certificate will immediately come under the purview of the Act. Thereby consumers of under-construction projects can seek protection under the Act.

5- Will it be mandatory for all builders/developers to register all their complexes under the Act?

5- Are there any exceptions to Registration of projects under the RERA Act?

There are three exceptions for registration under the Act –
(a) Where the area of land proposed to be developed does not exceed 500 sq m or several apartments proposed to be developed do not exceed eight, inclusive of all phases. While the central government provides for these minimum area requirements the local governments can change the area requirements to conform to the Act if required such a minimum area threshold can be revised even lower.
(b) Where promoter has received a completion certificate for Real Estate Project before the commencement of Act
(c) For purpose of renovation or repair or re-development which does not involve marketing, advertising, selling or new allotment of any apartment, plot or building, under real estate project

6- What is the tenure or validity of registration under RERA?

Registration shall be valid for the period required to complete the project or phase, as declared by the builder/developer.

7- Can registration be extended?

Registration can be extended only in the case of natural calamities like floods, drought, fire etc. or in the case of a war. Such extensions, if applied for by the builder/developer, will be for a period of one year.

8- Can the registration be revoked?

Registration under RERA can be revoked by RERA if it receives a complaint against the developer and is satisfied that the Developer has not complied with the rules under the Act, or has violated the terms and conditions of approval, or is involved in unfair practices to sell, market or advertise his projects.

9- What is the provision for an aggrieved person to lodge a complaint? Does he have to go through the existing judicial system?

The Act mandates setting up of an Appellate tribunal by the appropriate government within one year of the Act coming into force. So, RERA is the first body to approach in case of disputes and as per the set of rules, this body can establish the nature of the violation and prescribe the penalty/ punishment. Any person aggrieved by the decisions of the RERA or an adjudicating officer can appeal to the Appellate Tribunal. This set up will fast track the process of dispute settlement since it minimises the involvement of the existing judicial system.
A person can appeal in High Court if he is aggrieved by the decision of the Appellate Tribunal however this isn’t allowed in cases where the decision was reached after consent of the disputing parties. The person has to approach the High Court within 60 days of receiving the decision.