The two leaders jointly inaugurated the Ground Earth Station and SATCOM network, developed with assistance from ISRO for utilization of South Asia Satellite in Bhutan

Modi said: “We had a comprehensive meeting, where we deliberated on the relations between India and Bhutan. There is great scope to further improve economic and cultural ties between our nations.” 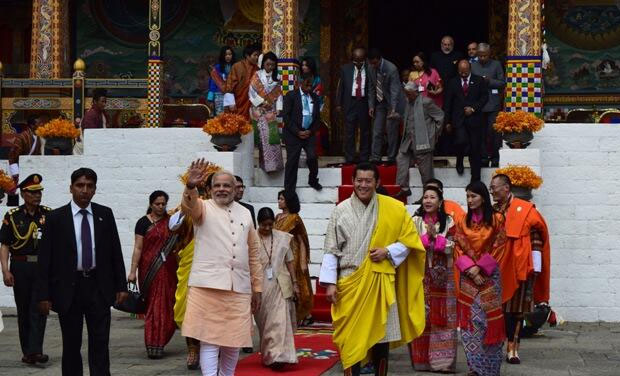 The PM, who is here on his second visit to Bhutan and the first since his re-election in May, inaugurated Mangdechhu hydroelectric power plant and also launched stamps to commemorate five decades of India-Bhutan hydropower cooperation. The two countries signed 10 memoranda of understanding in space research, aviation, IT, power and education.

MOU’s Signed Between India And Bhutan:

6- MoU between Jigme Singye Wangchuck School of Law, Thimphu, Bhutan, and National Law School of India University, Bangalore, India, on enhancing relations between the two parties and seeking to develop academic and cultural interchange in the areas of legal education and research

7- MoU between the Royal University of Bhutan and Indian Institute of Technology, Kanpur

8- MoU between the Royal University of Bhutan and Indian Institute of Technology, Bombay

9- MoU between the Royal University of Bhutan and National Institute of Technology, Silchar

10- MoU between the Royal University of Bhutan and Indian Institute of Technology, Delhi

Foreign Secretary Vijay Gokhale said at a press conference preceding the PM’s visit: “Bhutan is the second country this (RuPay Card) will be launched in after Singapore. This will be done in two phases — in the first phase Indian banks will issue RuPay cards which can be used by Indian travellers in Bhutan. The next phase will be where the banks of Bhutan will be empowered to issue RuPay cards to Bhutanese citizens to use in India.