Maharashtra Elections 2019: Nearly three weeks ago, Maharashtra seemed to have given a clear mandate for the BJP and Shiv Sena to return to power. On Tuesday, the state was placed under President’s Rule. Here is what happened in the days between. 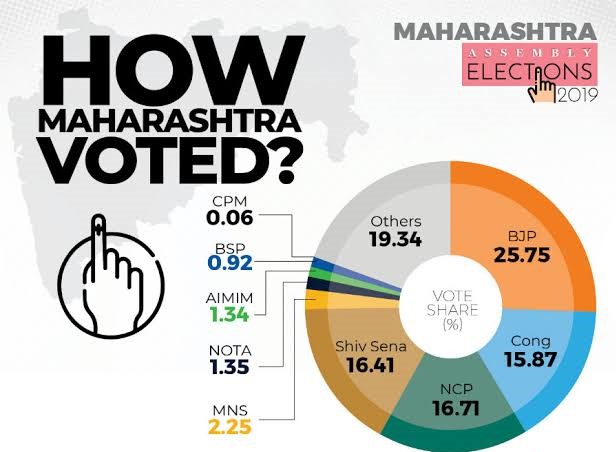 The story of how Maharashtra went from a clear electoral mandate to the political mess it finds itself in right now is one that involves long-time frenemies becoming enemies (for now) and parties at the opposite of ends of the ideological spectrum contemplating coming together.

How the story will end is anybody’s guess — Maharashtra will likely remain under President’s Rule for the near future. But how we got here is certainly something we can recap for you.

Elections to the 288-member Maharashtra assembly were held on October 21 this year. The elections were held just months after the Bharatiya Janata Party won a landslide victory in the Lok Sabha elections.

The elections were fought by two alliances — Bharatiya Janata Party-Shiv Sena and Congress-Nationalist Congress Party. This was a departure from the 2014 Maharashtra assembly election when all the four parties had fought solo.

However, with the BJP not being able to cross the majority mark on its own, it joined hands with its ideological cousin Shiv Sena ultimately and the two went on to rule the state in coalition for five years under chief minister Devendra Fadnavis.

MAHARASHTRA ELECTION RESULT: WHO WON WHAT:

Results for the Maharashtra assembly election were declared on October 24. There were no surprises. As was widely expected — and predicted by exit polls — the BJP-Shiv Sena coalition comfortably crossed the majority mark, winning more than 160 seats combined. They needed 145 to form the government.

While the BJP looked set to return to power with the help of its ally Shiv Sena, there was some cause for worry for the party: the BJP had lost more than 15 seats compared to its 2014 Maharashtra election tally.

WHAT HAPPENED AFTER THE MAHARASHTRA ELECTIONS 2019:

After the Maharashtra election results, the road seemed clear for the BJP and the Shiv Sena to form the government. However, mysteriously, nobody came forward to formally stake claim to power. It turned out, the BJP and Shiv Sena weren’t quite seeing eye-to-eye on sharing power in Maharashtra.

Rumblings of a divide between the saffron parties had begun on result day itself when Sena leaders spoke of holding their ally to a ’50:50 agreement’ that had apparently been arrived at by BJP chief Amit Shah and Shiv Sena boss Uddhav Thackeray before the Lok Sabha elections.

Soon, both the parties admitted to the root cause of their divide: The Shiv Sena said it wanted a written assurance from the BJP that it would share the chief minister’s post. The BJP, on the other hand, expressly denied the existence of a deal to rotate the CM’s chair between the two parties.

WHAT WERE THE NCP AND CONGRESS DOING:

While the BJP and Shiv Sena continued to fight it out, the Congress and the Nationalist Congress Party decided to play the watching game.

Arithmetically speaking, no party in Maharashtra had the ability to form a government without the help of any other. The possible combinations in Maharashtra were: BJP-Shiv Sena, Shiv Sena-Congress-NCP, BJP-NCP and BJP-Congress.

And so, the NCP and Congress found themselves in focus even as they steadfastly maintained that they were willing and happy to sit in the opposition seats.

Meanwhile, the BJP continued to express confidence that all would be well and that an agreement with the Shiv Sena would ultimately be reached.

WHEN IT ALL UNRAVELLED:

Devendra Fadnavis resigned as Maharashtra’s chief minister. It would have been a formality, except for the fact that Fadnavis, as the leader of the single-largest party in Maharashtra, did not stake claim to form the next government.

Instead, Fadnavis held a press conference where he took the Shiv Sena to the task. From saying that even the Congress hadn’t criticised the BJP like the Sena had, to once again denying the presence of a CM-rotation deal, Fadnavis all but called off the alliance with his ally

Later in the evening, Shiv Sena chief Uddhav Thackeray held a similar press conference where he accused the BJP of lying and said Maharashtra does not trust “Amit Shah and company”. Thackeray doubled down on Sena’s demand for rotating the chief minister’s chair.

The Governor’s Role In Maharashtra Elections 2019:

Bhagat Singh Koshyari, the governor of Maharashtra, had been silent in the days after the election results as a political slugfest continued. On the weekend of November 9-10, he got into action.

On Sunday evening, the BJP refused. The party said it did not have the numbers necessary and so, would not be forming a government. A few hours later, Governor Koshyari turned to second-largest party in the Maharashtra assembly — Shiv Sena — and asked it to show “willingness and ability” to form the government.

On Monday evening, Yuva Sena chief and Uddhav’s son Aaditya Thackeray met Governor Bhagat Singh Koshyari and told him that his party was in discussions with other parties and had “in-principle” support from them.

Aaditya said the Shiv Sena was willing to form the government but asked for more time from the governor to furnish the formal letters of support from the other parties. Governor Koshyari refused.

On Tuesday morning, the NCP reportedly asked the Governor for more time. But he would have none of that.

In the afternoon, Governor Koshyari wrote to the Centre saying he was “satisfied that the government cannot be carried on in accordance with the Constitution” and so, was recommending President’s Rule in the state.

The Union Cabinet added its stamp on the recommendation and soon, President Ram Nath Kovind signed a proclamation imposing President’s rule in Maharashtra and sending the state’s assembly into suspended animation.

What this essentially means is that the Central government temporarily takes over governance of Maharashtra and the state assembly’s role will be taken over by Parliament.

WHAT NOW FOR MAHARASHTRA?

Legally, President’s Rule can last for six months. This gives some time for the different political parties to work out their difference and come up with a coalition that can form government in Maharashtra.

Technically, any party that believes it has the required numbers can approach the governor who can then invite the party to form the government and prove its majority on the floor of the House.

If the logjam continues and there is no alliance willing or able to stake claim to power, President’s Rule will have to be extended — after approval from the Union cabinet — or fresh elections will have to be held in the state.

Which does the future have in store for Maharashtra’s politics? We’ll know more in the coming days.