LPG Price Reduced: With this, the non-subsidized price of each domestic LPG cylinder has come down by Rs 100

The price of non-subsidised LPG Sunday was cut by over Rs 100 per cylinder on the back of softening international rates, Indian Oil Corp (IOC) said while Subsidized LPG price reduced Rs 494.35 per cylinder. According to a press release issued by Indian Oil, the decision to cut rates was taken in view of softening LPG (liquefied petroleum gas) prices in the international market and a favorable dollar-rupee exchange rate.

The cooking gas in Delhi will be priced at Rs 637 per cylinder from midnight tonight as against Rs 737.50 currently, IOC said in a statement. Moreover, Subsidized LPG price reduced after the rate revision. Subsidized LPG Rates have come down to Rs 494.35 per cylinder. The release also said that the balance amount of Rs 142.35 per cylinder “would be borne as a Subsidy” by the central government and the same will be transferred to the customer’s bank account after the purchase of a refill.

The move comes a month after the prices of LPG were hiked by up to Rs 25 (14.2 kilograms) with effect from June 1. This was the fourth consecutive price hike in this calendar year. IOC had also jacked up the non-subsidised LPG prices in May by Rs 6 per cylinder. 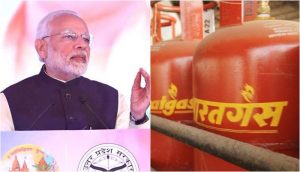 Following this, the Modi government was slammed by the opposition. West Bengal Chief Minister Mamata Banerjee-led Trinamool Congress had also threatened to go on a statewide protest to oppose the move.  “Why have the LPG cylinders prices been hiked, once the election process was over?” Mamata Banerjee had asked the Centre. “We condemn the gas price hike and will take out rallies in every block,” she said. At present, the government subsidizes 12 cylinders of 14.2 kg each per household in a year. For any additional purchases, the consumer has to bear the market price. The extent of the subsidy varies from month to month, depending on changes in the average international benchmark LPG prices and foreign exchange rates.