Explained: The Importance Of Kartarpur In The Sikh Religion

The Kartarpur Corridor is open. The first jatha of over 500 Indian pilgrims crossed the 4.2-km stretch from Gurdaspur to Gurdwara Darbar Sahib in Pakistan’s Kartarpur on Saturday (November 9). What makes Kartarpur, one of the holiest shrines of the Sikh religion, so special?

Guru’s journey: From Talwandi to Kartarpur

Kartarpur marks the most significant and constructive phase in the life of Guru Nanak Dev. It was here on the banks of the river Ravi that he laid the foundations of a new faith in a commune he set up. Prof J S Grewal, eminent historian and former Vice-Chancellor of Guru Nanak Dev University, who is writing his second book on the founder of the Sikh religion, says Guru Nanak came to the town between 1520 and 1522 after he had travelled widely across continents. 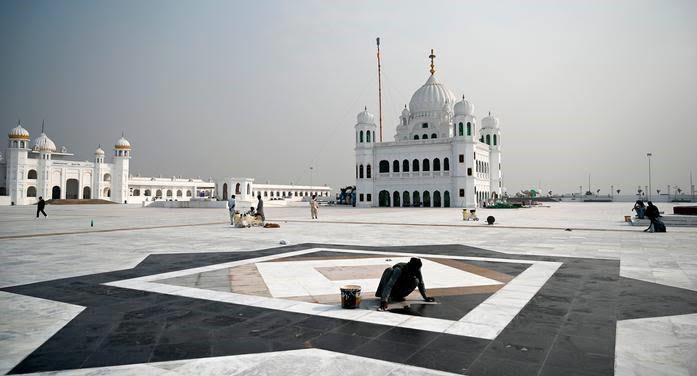 He had spent the formative years of his life at Talwandi, a town founded by a rich landlord named Rai Bhoi, about 90 km west of Lahore in Pakistan, where he was born in 1469. The Rai’s great-grandson, Rai Bular Bhatti, renamed it ‘Nankana Sahib’ in the honour of Guru Nanak. Today it is the capital of Nankana Sahib district.

The next 10 years of Guru Nanak’s life were spent at Sultanpur Lodhi, where he gained enlightenment. “For the next 20 years, he travelled widely crisscrossing nations,” says Prof Grewal. He finally came to Kartarpur rich with experiences gained from his interactions with rulers, common people, clergymen, and thinkers. The Janam Sakhi on Guru Nanak’s life says he was offered this piece of land by a ‘Karori’ (administrator of a pargana) who was initially against him, but subsequently became his disciple.

Guru Nanak called it Kartarpur, and started living here with his parents, wife Mata Sulakhni, and two sons, Sri Chand and Lakshmi Chand, thus demonstrating that he preferred the life of a householder to that of an ascetic.

The goal of life, according to Guru Nanak

Guru Nanak believed the supreme purpose of human life is to gain enlightenment or a state of union with God. It was at Kartarpur that he taught his followers the way to liberation by practising it.

Prof Grewal, who based his earlier book ‘Guru Nanak in History’ on Nanak’s compositions, says, “He did not favour a life of renunciation, on the contrary, he felt that you can take up additional responsibilities after liberation, for then you know that your life is not meant for you alone but for the welfare of others.’’ He wrote, “Ghaal khaye, pich hathon de, Nanak raah pehchane se (A person who works hard and shares the fruits of his labour can recognise the true path).

The path the Guru showed

At Kartarpur, Guru Nanak practised what he preached—“naam japo, kirrt karo, wand chhako (worship, work, and share)” — as the path to liberation

He and his followers cultivated the land at Kartarpur, and also reared cattle. As per the Janam sakhis, Guru Nanak used to bring his cattle to graze at the well of Ranjita Randhawa, a landlord at Pakhoke Randhawa, now called Dera Baba Nanak from where the Kartarpur Corridor starts, a few kilometres from Kartarpur.

Nanak believed in the importance of singing the praises of God as a way to gain liberation. He set up a ‘dharamsal’ (a place where dharma or merit is earned) at Kartarpur, where he and his followers would sing his compositions in the morning and evening.

Prof Grewal says that for 200 years, such places continued to be called ‘dharamsal’, and it was only in the 18th century that these were called ‘gurdwara’ (a place where the Guru lives). “Nanak used the word ‘dharamsal’ as a metaphor for the Earth where human beings had an opportunity to gain liberation,” says Prof Grewal.

Besides ‘kirtan’ (praise of God), Nanak also introduced his followers to ‘katha’, exposition of his composition or other issues. It was at Kartarpur that Nanak started the concept of ‘langar’, a community meal prepared in a community kitchen where everyone would sit on the floor and eat together regardless of their social background.

The distinctive feature of Sikh identity — Service before Self — was formulated by Guru Nanak at Kartarpur. Nanak preached that every human being, regardless of his family, caste, creed or gender, can attain liberation by following the three principles of work, worship and sharing. His programme was of universal liberation and redemption.

“It was at Kartarpur that Nanak gave the three Gs — Gurdwara, the Granth, and the Guru himself — that underpin the Sikh faith,” says Prof Grewal.

Baba Sukhdeep Singh Bedi, who claims to be the 17th generation descendant of Guru Nanak Dev, says that when the Guru passed away, both Hindus and Muslims wanted his remains. According to the janam sakhis, when they removed the white sheet, they found only ‘Phool’ (flowers), that they divided amongst themselves.

Historians say the flowers are a metaphor for remains. Bedi says they divided the white sheet and flowers into two. While the Muslims buried these under a mazaar, the Hindus put these in an urn and buried it alongside. Gurudwara Darbar Sahib came upon this place and the locals still pray at the mazaar there.

But a few years later, when the place got flooded, Guru Nanak’s son Sri Chand dug up the urn and brought it to Pakhoke Randhawa (Dera Baba Nanak) where a gurdwara was built on it. The well that Nanak used to frequent is also in the compound of this gurudwara.