The students of the varsity, which has seen several such agitations in the recent years, were protesting outside the All India Council of Technical Education (AICTE) premises, the venue for the varsity’s third convocation, which was addressed by Vice President M Venkaiah Naidu.

What Are The Demands Of The Students: 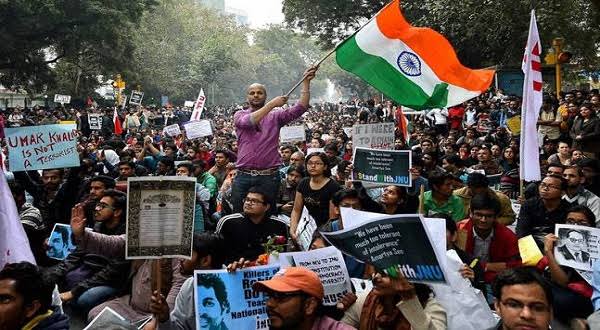 In a statement, they said, “Due to the 999 per cent fee hike that is being imposed on us, the University today faces an unprecedented crisis, with an overwhelming number of its students facing a threat to their academic future.”

The statement said that the protests would continue as the fee hike constituted an attack on the students from “the poorest and most marginalized sections in this country”.

“JNU remains a university which is still accessible to the poorest and most marginalized sections in this country and this present move is a brutal attack on not just current students but on all those students from such backgrounds who fight and aspire for higher education. This is why the protest will only intensify if the demands are not dealt with soon.”

Students said that the police used force against them and several among them sustained injuries. However, a senior police officer, said there were orders from seniors to not use force and the on-ground personnel were not even carrying their weapons. “We were not even carrying sticks. The mild force had to be used to quell the protesters but students were not lathi-charged. In fact, many of our policemen and women were injured but we do not want to show the injuries we sustained. One of the students bit hard on the hand of one of our women personnel while she was trying to control the crowd.

The venue became a nightmare for scribes covering the protest as TV cameras and female reporters were allegedly heckled and pushed away by the crowd.

The All India Students’ Association (AISA) appealed to the student’s community to observe National Protest Day on their campuses on November 14 in support of the JNU students and against the National Education Policy.