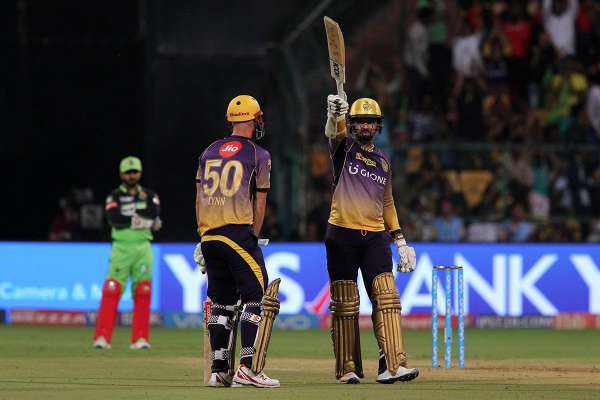 Sunil Narine with his destructive 17 ball half century helped Kolkata Knight Riders beat Royal Challengers Bangalore by four wickets in their opening match of Indian Premier League season 11 at the Eden Gardens in Kolkata on Sunday.

RCB won the toss and put a challenging total of 176 on the board at the jam-packed stadium of Eden gardens. However, in the end, Kolkata Knight Riders managed to win the game

Narine gave the hosts a blazing start in their chase as he clobbered Yuzvendra Chahal for a four and a six in first two balls of the innings. But his opening partner Chris Lynn was dismissed in the second over by Woakes. Narine though kept the scoring-rate high and smacked Woakes for 20 runs in the fourth over by hitting couple of sixes and fours.

Narine then hit consecutive sixes off Washington Sundar in the fifth over as he raced to fifty in just 17 balls. But the West Indian dragged one to his stumps in the next over bowled by fired-up Umesh Yadav. Narine hit five sixes and four boundaries in his 19-ball 50 and set a perfect platform for KKR as they reached 68/2 in six Powerplay overs.

Nitish Rana then made sure that run-rate remained high as he hit a six and a four off Kulwant Khejroliya in the seventh over. Umesh though kept the pressure on and dismissed Robin Uthappa (13) in the eighth. Rana and Karthik then took KKR closer to the target as they added 55 runs for the fourth wicket.

When Rana was trapped LBW by Sundar in the 15th over, KKR were on 138/4 needing 39 more off 33 balls. Rana hit couple of sixes and fours in his 25-ball 34 innings. Andre Russell smacked two fours and a six off Umesh in the 17th over to make the equation 15 off 18 balls, before becoming the third victim of Woakes.