Indian Economy Slowing Down: Reasons Behind It

Indian Economy slowing down, since the beginning of 2019. The GDP growth during January to March 2019 slowed down to 5.8%. Looking at economic activity in the period April to June 2019, it is safe to say that the GDP growth would have slowed down further during the period.

The GDP of an economy is the sum of private consumption expenditure, investment, government expenditure and net exports (exports minus imports). There are many high-frequency economic indicators which tell us about the state of each of these four inputs that form the GDP. Let’s look at a series of 15 economic indicators to see how the economic activity during the period April to June 2019 has slowed down. Indian economy slowing down in rapid pase.

Crisil pointed out that towards the end of the financial year 2016-17, 3 major disruptions were seen leading to a slowdown,namely- demonetisation, US-China trade war and the Infrastructure Leasing and Financial Services (IL&FS) debacle.

“Fiscal 2017 was synonymous with demonetisation. Just as its effects were petering out, came the NBFC credit crunch in 2018, caused by the IL&FS crisis. By 2018-end, weakening global trade and GDP growth, led by US-China tariff wars, had caught up,” it said.

Further, the new tax system-GST-was introduced in 2017, RBI adopted an inflation targeting framework and the Insolvency and Bankruptcy Code (IBC) was implemented.

“Reforms, in general, could be short-term disruptive and long-term supportive. We saw the first part happen around the GST. Though not inflationary, it did disrupt export growth in 2017, when global growth was at its highest since the financial crisis.”

“In fiscal 2020, we expect to see continued streamlining of GST and IBC processes.That should gradually relay into greater efficiency and growth over the next few years,” it added. 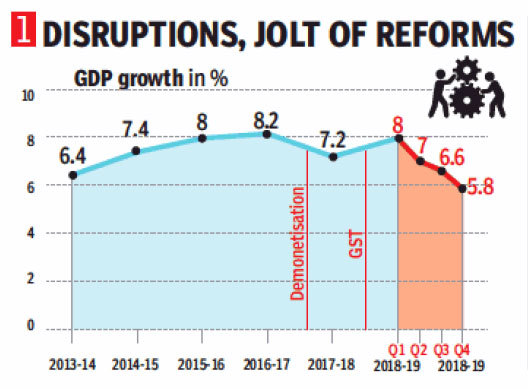 In a gloomy global trade scene, export-led growth was not possible. Risks from the outcome of US-China trade war and Brexit outcome also brings immense uncertainty.

Moreover, “Crude prices were favourable in the first three years of National Democratic Alliance (NDA) I, which created tailwinds for India’s growth, inflation, and fiscal deficit. However, that has moved up since fiscal 2018, reversing the advantage.”

Crisis in the financial sector

Crisil report says that “The banking sector’s NPA ratio worsened throughout the UPA-II term and is still quite high.” Just as the NPA ratios started to improve, the NBFC stress build up, which spread faster due to interconnections with mutual funds, bank and corporate sector.

“For fiscal 2020, bank credit growth might improve somewhat, but NBFC credit looks subdued, despite the partial guarantee scheme announced in the Union Budget 2019-20,” it said.

Farm income lowered as agricultural terms of trade worsened. “Non-food inflation continued to surpass food inflation in the past two years, amounting to income transfers from rural to urban areas,” the report said.

“Farm income could get a leg-up from the government’s income transfer scheme, and a rise in food prices would boost the terms of trade,” it projects. Another reason behind indian economy slowing down are:

These have not been as badly hit as car sales. Between April and June 2019, two-wheeler sales contracted by 11.7%. This is the biggest fall since October to December 2008, when two-wheeler sales had contracted by 14.8%, in the aftermath of the start of the financial crisis. In fact, even mopeds are not selling, with their sales down 19.9% between April and June 2019 (In 2018-2019, a total of 880,000 mopeds were sold, suggesting there is still good demand for them).

How does one explain the fact that housing loans are growing and so is the number of unsold homes? A possible explanation for the fact is that people are now buying homes from investors who had bought many homes between 2003 and 2012, instead of buying directly from a builder. To that extent these are not new homes and hence, cannot create the kind of economic activity that the building of a new home can.These are some factors due to which indian economy slowing down.