Oriental Bank of Commerce and United Bank of India have been merged into Punjab National Bank; Allahabad Bank merged into Indian Bank, Syndicate Bank into Canara Bank, among another bank merger.

On Friday, Finance Minister Nirmala Sitharaman announced the government’s decision to merge 10 state-owned banks to create four large entities or lenders. Under the plan, Oriental Bank of Commerce and United Bank of India will be merged with Punjab National Bank; Canara Bank with Syndicate Bank; Andhra Bank and Corporation Bank with Mumbai-based Union Bank of India; and Allahabad Bank with Indian Bank. That will mean a consolidation of banks in India from 27 before 2017, to 12 after the merger goes through. 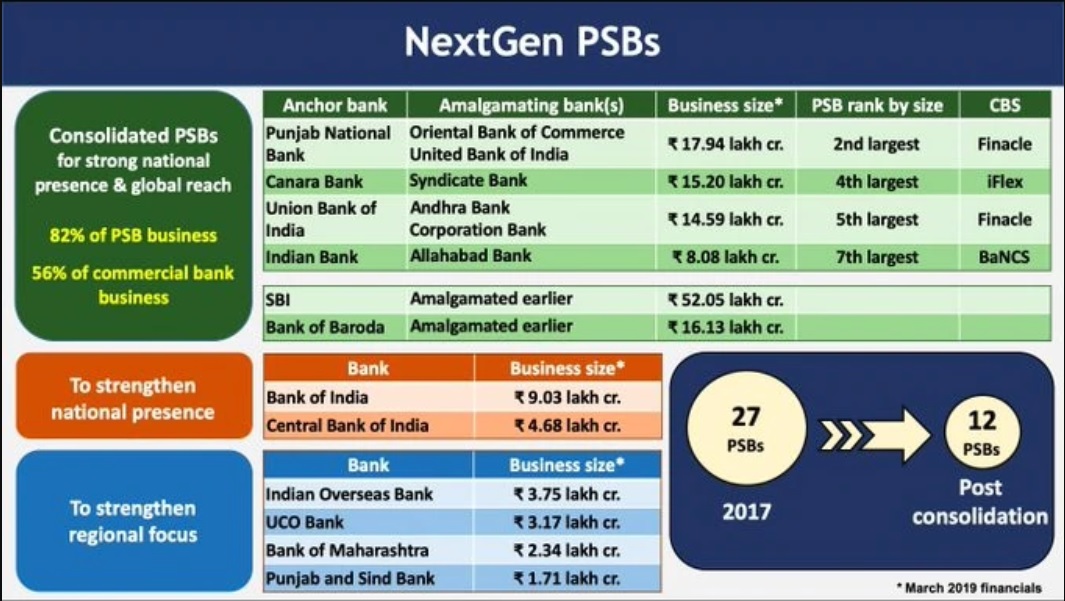 How Does It Helps:

For over decades starting from 1992, the government as the biggest shareholder of over 25 banks had to provide capital for them. To grow and lend more, the banks often need a higher amount of capital to set aside also for loans that could go bad. With the government not willing to lower its equity holdings and with a large slice of the capital being set aside to cover for bad loans, which have swelled over the last few years, the burden of infusing capital rests on the majority shareholder. This means marking a large amount of money almost every year during the last few years in the Budget for many banks at a time when there is a huge demand for funds for education, health and other programmes. By reducing the number of banks to a manageable count, the government must be hoping that the demands for such capital infusion will be lower progressively with increased efficiencies and with more well-capitalised banks. It will also help that the government can focus now on fewer banks than in the past.

The bank merger integration process would take 24-36 months. Website, mobile apps, IVR — all have to get merged into one. While you are doing this, cybersecurity becomes an important matter to look into,” said Sanchit Vir Gogia, chief executive, Greyhound Research.

During the integration, the lenders will generate huge amounts of data and analytics will play a bigger role to create 360-degree user profiles, taking data from multiple banks, Gogia said.
A senior executive at a multinational tech services firm said even if the core banking platforms are the same, each would require customisation. Beyond technology integration, banks will need a better communication strategy.