Government Services: Delhi government added 30 more facilities under its doorstep delivery project, taking the total number of public services available under the scheme to 70. It will provide 30 more services under its flagship doorstep delivery of services from next month, minister Kailash Gahlot said. The Government Services include adding members in ration card, paying the motor vehicle tax and getting a DTC pass etc.

With this move, the total number of government services provided via the initiative will now be 70, an official statement said. A senior government official said Delhiites could apply for the new services from today, though the second phase would be formally launched on September 1. “We will soon have a formal launch. The remaining 30 services will also be added within a couple of months,” administrative reforms minister Kailash Gahlot said.

Residents can dial 1076 and get the service by paying Rs 50 extra, an official from Delhi’s Administrative Reforms told IANS. In the first phase, people got certificates of marriage, caste, domicile, income, births and deaths among others at their doors. Driving license, new water or sewer connection and disconnection were also provided under the scheme which functions between 8 a.m. and 10 p.m. through a ‘Mobile Sahayak’.

“Once the second phase is on track, steps to start the third phase will be initiated,” the official said.

Though the government had promised to add the remaining 60 services in two-three months, initial problems and technological glitches had delayed it by a few months. Gahlot said the model code of conduct due to the Lok Sabha elections had pushed the date further.

Deviating from the established procedure where the facilitators often struggled for hours to upload the documents at the applicant’s doorstep due to bad connectivity, the hard copies of all relevant papers are collected and then uploaded at a location where seamless internet is available, an official said. “This saves a lot of time. The facilitators now only fill up the basic information – name, address, age and service required in the offline software at the applicant’s place and generates the fee receipt, he added. 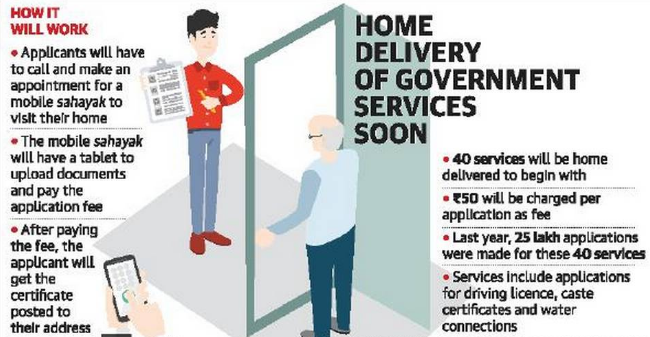 It also helps the backend team to make a file of the hard copy of the documents and send it to the department concerned where proper records of all applications are kept.

The applicants now also get text messages from the call centre at every stage – from booking the appointment till the document they have booked are ready and dispatched, an official said. The applicants also have the opportunity to reschedule or cancel an appointment a day before the service facilitator is supposed to reach his venue.