The United Nations on Wednesday listed Pakistan-based Jaish-e-Mohammed chief Masood Azhar as a global terrorist after China lifted its hold on the proposal.

“Big, small, all join together. Masood Azhar designated as a terrorist in UN Sanctions list.

China had put a hold in March on a fresh proposal by the US, UK and France to impose a ban on the chief of the JeM, which claimed responsibility for the deadly Pulwama terror attack.

Prime Minister Narendra Modi Wednesday said the UN decision to declare Masood Azhar as a global terrorist is a big success for India’s efforts to root out terrorism and proved that the country’s voice can no longer be ignored on the global stage. 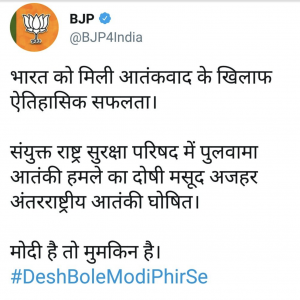 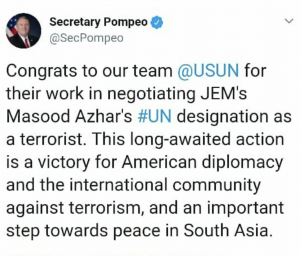