Aiming to take a billion dreams to the moon, India on 22 July 2019 successfully launched its second lunar mission Chandrayaan 2 onboard its powerful rocket GSLV-MkIII-M1 from the spaceport at Sriharikota to explore the unchartered south pole of the celestial body by landing a rover. India’s second lunar mission was on track as its ‘Baahubali’ GSLV rocket successfully put the moon spacecraft – Chandrayan 2 – into the orbit in a copybook style on Monday (22 July) afternoon.

The mission’s success brought in huge relief for ISRO scientists after the 15 July launch was called off just about an hour left following a technical glitch in the rocket. The ₹978 crore mission, that will mark a giant leap in India’s space research and make it only the fourth country to have landed a rover on Moon, was rescheduled to Monday after scientists corrected the technical glitch in the three-stage rocket.

The geosynchronous satellite launch vehicle lifted-off from the 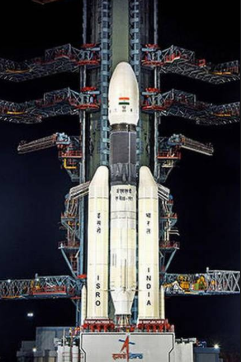 Satish Dhawan Space Centre, Sriharikota into cloudy skies at 2.43 pm and successfully placed the 3,850-kg Chandrayaan-2 into the earth orbit about 16 minutes later. The 43.4 metres tall, 640-tonne rocket, nicknamed ‘Baahubali’, carried the 3.8-tonne Chandrayaan-2 spacecraft, which will carry out India’s second mission to its closest celestial neighbour. After the launch, the Indian Space Research Organisation (ISRO) Chairman K. Sivan said: “I’m extremely happy to announce that the GSLV-Mk III-M1 successfully injected Chandrayaan-2 spacecraft into Earth orbit. It is the beginning of a historic journey for India towards the moon and to land at a place near the South Pole to carry out scientific experiments. I salute to all those involved in the launch of Chandrayaan 2.”

Chandrayaan-2 is unique because it will explore and perform studies on the South Pole region of lunar terrain which is not explored and sampled by any past mission. This mission will offer new knowledge about the Moon.

Congratulations to ISRO scientists on flawless launching of #Chandrayaan2 from Sriharikota. Team ISRO scripted a new chapter in India’s space history with the launch of this ambitious and indigenous Mission to Moon. The nation is extremely proud of its scientists and Team ISRO.

I congratulate our scientists at ISRO for the successful launch of #Chandrayaan2 and setting yet another benchmark in the field of space technology. A grateful nation is proud of them. I also thank PM Modi ji for encouraging our institutions for setting new standards everytime.

Chandrayaan-2 has been successfully launched. I extend my heartiest congratulations to our countrymen on this momentous achievement. Our scientists deserve a special compliment, their achievement has enhanced country’s pride.

The historic launch of Chandrayaan-2 from Sriharikota is a proud moment for all Indians. Congratulations to our scientists and engineers for furthering India’s indigenous space programme. May ISRO continue to master new technologies, and continue to conquer new frontiers.