The Chandrayaan 2 lander Vikram, which houses the six-wheeled rover Pragyaan, has separated from the orbiter and is now on its way to the Moon

Pragyaan and Vikram are finally on their way to the Moon. After a journey of around a month and a half, Chandrayaan-2 is just six days away from achieving the unachieved — landing a rover on near the south pole of the Moon, a feat unaccomplished by any other country.

Praygyaan is Chandrayaan 2 six-wheeled rover that is currently housed in the Vikram lander. The lander and the rover succesfully broke from the Chandhrayaan-2 orbiter Monday afternoon and began their own journey to the Moon. 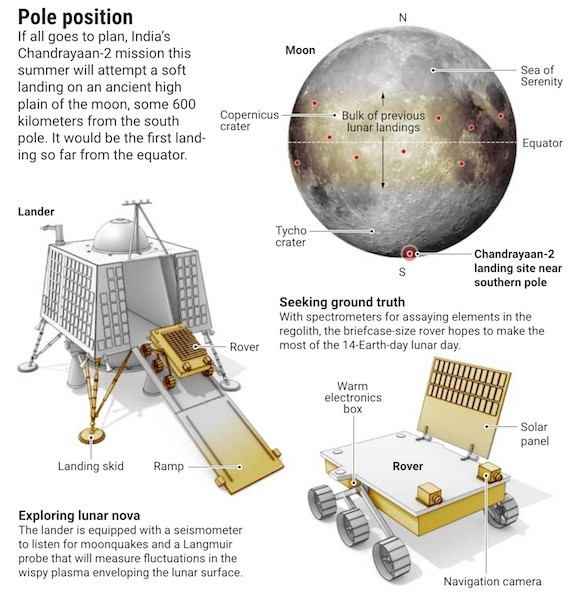 The separation took place at 1:15 pm Monday afternoon, the Indian Space Research Organisation (Isro) said. Vikram is now in an orbit of 119 kms x 127 kms around the Moon — while on this orbit, the closest Vikram will come to the lunar surface will be 119 kilometres while the farthest it will be is 127 kilometres.

The orbiter is also flying in the same orbit and will continue to do so for the next one year.

Vikram lander will then be put on a separate, circular path identical to the orbiter, passing over the lunar poles at a distance of roughly 100 km from the surface.
By attaining a near-circular orbit, there are only three more mission milestones before the Vikram lander attempts its planned soft-landing on the moon’s surface on 7 September at 1.55 am IST. This includes two deorbit (orbit-lowering) manoeuvres on 3 and 4 September and its powered descent from an elliptical orbit of 36 x 110 km between 1.30-2.30 am on 7 September.

Over the course of the next few days, the first maps of the landing site will be created (planned for 3 and 4 September) by the Vikram lander to ensure the landing site is safe, as previously thought, to make a soft-landing. This is a crucial step in the mission since ISRO’s mission engineers won’t be operating the spacecraft remotely from the control centre.The orbiter will also be surveilling its year-long home for the first time, ensuring that no damage was caused to its instruments on the journey so far and conducting a thorough examination of the Vikram lander’s landing site at the moon’s South Polar region.