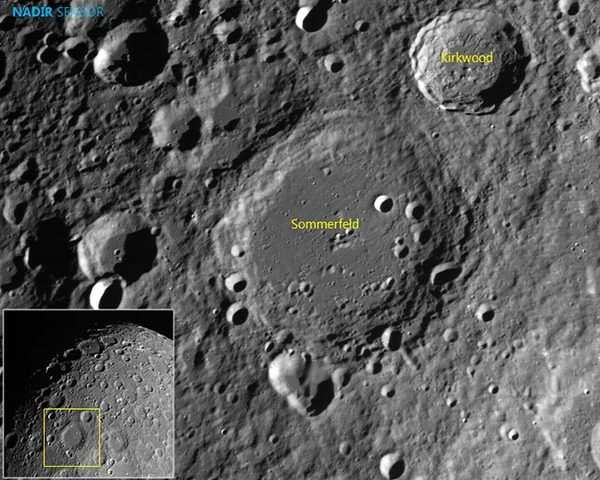 Chandrayaan 2 beams the second set of lunar images. ISRO tweeted the pictures sent by Chandrayaan 2. “Lunar surface imaged by Terrain Mapping Camera-2(TMC-2) of #Chandrayaan2 on August 23 at an altitude of about 4375 km showing craters such as Jackson, Mach, Korolev and Mitra (In the name of Prof. Sisir Kumar Mitra),” tweeted ISRO along with images of Moon. Jackson is an impact crater located in the northern hemisphere of the far side of the Moon. It is a 71 km dia crater at 22.4°N and 163.1°W (shown in the inset). The interesting feature at the western outer rim of Mach crater is another impact crater, Mitra (92 km dia). It is named after Prof. Sisir Kumar Mitra, who was an Indian physicist and Padma Bhushan recipient known for his pioneering work in the field of ionosphere and Radiophysics. The Korolev crater seen in the image is a 437 km crater which has several small craters of varying sizes.

Chandrayaan-2 is currently flying around the Moon in an elliptical orbit of 118 kms x 4412 kms — the closest Chandrayaan-2 comes to the Moon while on this orbit is 118 kms while the farthest is 4412 kms.

Over the next few days, Chandrayaan-2 will perform a series of manoeuvres to bring itself closer and closer to the Moon. On September 2, the lander Vikram will separate from the Chandrayaan-2 spacecraft and get into an orbit of its own around the Moon.

Then finally on September 6, Vikram will begin a 15-minute powered descent, at the end of which it will land near the south pole of the Moon and set free the six-wheeled rover Pragyaan that will roam the lunar surface for around 14 Earth days.

WHAT MAKES CHANDRAYAAN-2 SO SPECIAL?

The southern polar region of the Moon has not received sunlight for billions of years, increasing the possibility of finding water under the surface of the Moon.

Finding water is one of the Chandrayaan mission’s main goals. The lunar rover will perform surface and sub-surface experiments to determine the extent of water presence on the Moon.